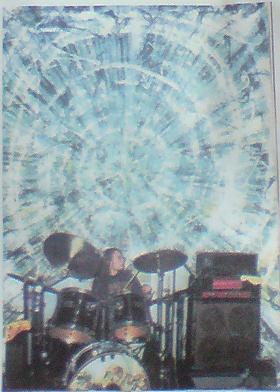 Malice in Wonderland, Three Daze After, Three Days After and/or Malice had a very brief but explosive, dangerous and outrageous existence from somepoint in 1991 to the Summer of 1992. Other than the singer, the group rented a shared house, an end terraced house on the northern side of Chorlton, Manchester. The nucleus of this house Carl, Dougie and Richie spent two years there, also with Steve for the first year, Ben the second and unauthorised lodger, Chris… To some, maybe this house was time served. It was undeniably a place where awesome work was done and fantastical plans were hatched – notably Thee Akoluthic. In this house, the spare room was stacked with bass and guitar amps, a drum kit permanently set up with a few token drapes, rugs and matresses to deaden the sound… At times, it was a place where very scary, incredibly heavy music was blasted out at great volume, heard probably by many in the neighbourhood. It was a make shift recording studio, private after hours club and even venue for a RNCM Violin Master Class!

The real formation and absolute end of the group that only gigged twice and recorded at a professional studio only once, came with the appearance and then sudden disappearance of the lead singer, Dimitri van Zwanenberg. Dimitri lived very close to the rest of the band; one day in 1991 and not unusually he came over to visit and ended up being the front man for the group. Having said he thought it sounded great the rest of the band invited him to take up vocals. He said he’d never sung before but was in, and for those two gigs and one recording session encapsulating Malice, Dmitri led the way. What happened just a few months later remains a bit of a mystery. He was here one day, gone the next and the general consensus of the group was that if Dmitri wasn’t the singer the band was no more. A bit of a hard line to take but that’s what happened. He had vanished, moved out or moved on and the band ceased to exist. Dimitri was then the President of the RNCM Student Union

After the second and last Malice gig, the local music guru, Richard Hector-Jones was found standing in the slowly dispersing previously opaque and impenetrable dry-ice staring at the stage, grinning, “was it meant to be like that … that was brilliant!?” The spectacle of the band in concert was only fleetingly captured on VHS but the riot of the experience as a whole is in the lengthy back-stage after show footage. 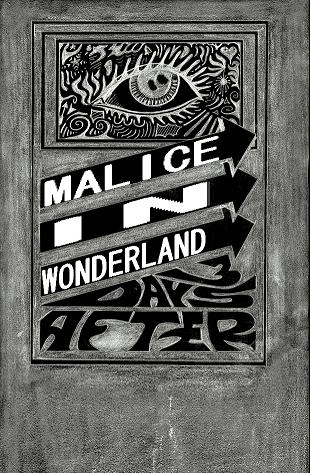 In the Spring of 1992, the group had self funded three days in Stockport recording studios. Courtyard Recording Studio was run by Tim Woodward and the point of sale for the band was his reaction to what sort of sound the band were after “All the needles in the red!”. He replied “what other sort of recording is there?” This collaboration proved to be the beginning of more than a few visits to Courtyard by groups and spin-off projects directly connected to music post-Malice. This place was particularly special to Creak.

Sandwiched in amongst College timetables and sheer hell bent enthusiasm, the session produced mixes of six songs. The sound being from all sorts of places and something like Motorhead, Monster Magnet, Black Sabbath; on the whole quite indescribeable maybe Anti-Folk. Two of the songs feature the brilliant Counter-Tenor voice of Steve Wallace, who had been lead singer in previous groups with Carl and Dougie. These two songs segue in to each other, begin and end in the sound of gulls and the sea; much more Classical-Folk than the Doom Rock of the cut immediately following (the slowest beast of a song) and to some ears this is strangely the sound of two different bands.

There was a lot of Jane’s Addiction on the stereo in the months leading up to the session, as there was Seal, Abba, Led Zeppelin, Black Sabbath, Shostakovich, Metallica, Hardcore, Techno, Carly Simon and The Elevators. The production of some of these albums being held in total awe by the band on as many levels as could be found and something they were keen to try their hand at. This was to be an epic recording for those at the heart of its making. The closest circle was maybe fairly tight-knit but the gossip spread like wild-fire and a serious clamp-down on the group’s activities took place. There was an attempted burglary, threats of expulsion and effectively, restriction orders placed against certain individuals spending any more time with the group.

It does sound fanciful but the house that shared the life of Malice was mecca for some. Those who lived there discovered and dreamed of this being the beginning of everything excellent in music, performance, composition and education. Despite the sudden disbanding of Malice barely a year old, in so many ways, the Great Sagas experienced then have only since brightened in brilliance. The intensely felt truth and theories expounded surrounding everything were done at Newport Road and have only proved themselves over and over – preaching to the converted and climbing the same mountain from different sides. Three Daze After and Malice etc are one and the same but very much only then the shoots of a complex and sprawling, beautiful musical flora to come