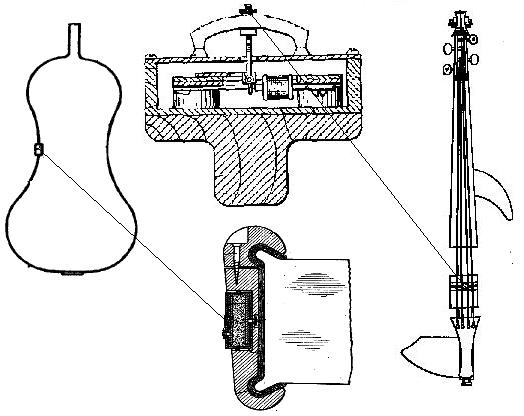 There are some sources of information regarding the gradual development of the violin, meticulous records exist of claims of improvements made to the violin. Many are in the form of patents and a significant number ridiculous enough to laugh at out loud. Any claim of ridiculousness should however be investigated when picking up the story pieces of the development of the modern violin.
As should be discovered, there is a message staring at the contemporary violinist if they will only stop and take in the significance. Glossing through the hundreds of kilograms of paper that make the many volumes of British and American patent books covering over a 100 year period is the job of a bookworm and desperately tenacious fanatic… Now, although not completely reliable, top Internet Search Engines give free access to vast lists of easily searchable material and even images of the actual documents themselves. The mere grams that make up the pages of relevance so easily missed to the violinist in the modern world though are treasures in their relatively few words.

Comparing registered patents relating to the violin, trends can be seen. The well documented musical needs and demands of days are echoed in the types of Patents taken out and approved. There has been a steadily growing business around the violin since it first appeared. During the last fifty years of the 19th Century there were many patents granted for accessories designed to help with holding the violin whilst practising or performing – chin-rests, shoulder-rests, straps, stands, clips, buttons and many other devices, some of which defy description. The general aim of them all a more secure hold of the instrument and therefore a freer approach to music making. This is good theory and selling point.
A more stable playing surface means that the instrument can be trusted to stay where it is during a performance. Late Romantic music was asking for virtuosity like never before and nothing look set to change the demand for great feats of dexterity, control and principally, power from violinists. According to some patent claims for supporting devices, the instrument can be held in a manner more suited to the player. Improved facilities around the body of the violin and a greater dexterity with the bow were demonstrated by some of the greatest virtuosos of the day in the nineteenth century using these improved supports.
One of these virtuoso violinists and unusually also inventor was Louis Spohr. He took out a patent for a chin-rest violin support and unlike most would-be pioneers of violin invention set a standard. Conversely and at the same period of history, the legendary Niccolo Paganini was noted for not using any attached support. Many violinists today play without the use of a majority of the patents actually granted but chin-rests and shoulder-rests are very common. Agreement on what makes a good method of holding the instrument is impossible as every player is different in physical build and has needs peculiar to that physique. The patents are evidence of at least the good intention towards solving problems. Most failed, others were missed.

Violinists living in the later part of the nineteenth century were certainly faced with the new problems imposed by the recording/broadcast devices. The audiences, the various sizes of orchestras, the growing trend to diverse designs of large concert halls, the new ideas expressed by composers and finally the players themselves accepted the challenge to develop and experiment with change. The tiny proportion of people who had access to the concert hall no longer limited the artists. Pre-recorded performances repeated over and over again were allowing a wider audience the opportunity to judge more fairly what had been presented. An experimental piece was no longer confined to the rubbish bin after one hearing, the listener had the chance to catch up with the innovator or expose the charlatan. A performer who relied more on theatrics than technical skill would find it impossible to perform within the very strict conditions imposed by recording or broadcasting devices. Singers in the earliest days had to have a microphone strapped to their faces like an oxygen mask. Violinists fared no better.
Despite increased technical demands of the music the devices used required the violinist to play in a very confined space directly in front of a cone shaped sound pick-up and to record the same piece many times in succession to make multiple copies of music. There was no other way of making more than one copy of a recording, other than by performing it again and again and having more than one recording machine in the room with enough people to operate them all. Totally not ideal but what happened all the same. If the player moved around too much whilst performing the music would not reach the new ‘invisible’ audience as parts of the recording would be rendered inaudible. A solution to this problem might to be found from a photograph of the violinist Kubelik recording in the early 20th Century. It is difficult to make out but the instrument appears to be resting on a support just to one side of the recording device which although relieving much of the weight of the instrument severely restricts his movement. Inventions specifically aimed at holding the violin exist and these bizarre conditions tolerated.

The various methods employed to bring more stability to a violin whilst being played have not really changed much during the 20th Century. Brand names have become associated exclusively with this aim in mind and new alternatives still marketed. By far the most common trend in patents relating to the violin however is the method of amplification. This has been of major importance in the history of the violin and is more properly a constant rather than a trend in the fashionable sense. From earliest beginnings the point of focus for the player is to vibrate the strings and for the audience to sense the vibration. Some of the earliest violins simply did not survive, the experiment failed, the failure was acknowledged and the inquisitive innovator returned to the drawing board. The instruments were faulty or too weak to cope with the pieces normally heard in the performance situations of their day. But there remains always the fear that perhaps there were innovations that failed to be recorded which might have been worthwhile but which were not recognised at the time.

Some patent claims contain references to inventions relating to Electric Telegraphs and sometimes Phonographs. The technology used in communications and in the new recording industry naturally found use in the performance of music. Their application to music opened up unexplored territories in sound. Looking at some of the ideas suggested in the patent books there is a strong argument that the unaltered, traditionally wooden violin, as perfected in the seventeenth and eighteenth centuries is everything you need to produce a vast range of beautiful, musical sounds.
“I have come to the conclusion that its form and manufacture… are not susceptible of any improvement, especially as regards the body of the instrument…”
(J.A.) Ernst, 1804

“There have been occasional experiments to alter the shape of the violin but all have failed from the tonal point of view. Further changes will doubtless be attempted in the future, but modifications in the basic shape of the violin are only likely to be dictated by musical necessity…”
K. Jalovec, Beautiful Italian Violins, 19??

Only a tiny proportion of the patents relating to violin challenge much, most are best summed up as tinkering. But there was something that rubbished the unalterable perfection attributed to the violin and came about because the violin was almost suddenly found to be imperfect. The impossibility of change turned out to be wrong. With this opinion upheld it is impossible for anything else and as such a wall is built but not a door. Unfortunately those people can only be broken out of their own prison by the very people who suffered because they dared to call for change.

It is clear that the attempts to increase volume, sonority and beauty of tone by the various and diverse ways suggested in the patent books nearly all failed because there was too much emphasis placed on the final instrument looking normal. Many inventors allowed their idea to be swayed too heavily by those who frowned because it just was not Violin. The trouble is that people do tend to judge things by the cover unless it comes supported by authority. True innovation often quickly tarred. The most important recent patents relating to the violin are found between the years 1889 and 1929, during which zeitgeist dictated to such a degree that it was necessary and more importantly possible to remove the bulkiest part of all stringed instruments, the body and still be left with the means to make audible music. The transition period certainly must have been a fantastic voyage for those alive and working at that time as professional and virtuoso violinists.

The effect of certain inventions cannot be appreciated solely from the levelling format all patent specifications are presented in. How much time actually goes by between the inventor’s inspiration and the invention having an effect is immeasurable. As some ideas pop up around the globe at seemingly the same time other ideas remain in obscurity forever. Equally too some flash by or crawl.

It is doubtful the names and dates of Newton and Hell, 1854; Pitt-Bull and Knight, 1879; Steadman and Bendall, 1885; Lake and Barnard, 1889; and Kesett and Love, 1891 appear collectively anywhere else? Together, as an example, they afford the opportunity to over-view the climate surrounding the violinist in the mid to late Nineteenth Century. In a few words what can be witnessed is various elements of the violin gradually combining together to form something fresh, new and exciting. By 1891, Kesett was working on preventing the violin from moving during performance and Love was using vulcanite to build violins.

Significantly electric violins at this point in history are still a relatively long-way off. A whole acoustic recording industry and market is yet to be born, develop and die. The seeds had been sown for the electric violin and there was little the generation of violinists born circa 1875 probably knew about it until way into their careers. In amongst the contemporary plethera of new inventions, original devices, and innovative designs it is difficult to see how anyone has taken any care or attention in nurturing the growth of the electric violin. Maybe some would have it wither and die or have it classed as a weed? For the turn of the century violinist finding employment in recording studios the inventors had created something completely unexpected, a violin that was perfectly acoustic but not really a violin of the Tradition.